Julia Forte and Victoria Griffiths-Fisher are two Creative Londoners who have become the voice of today’s gin renaissance. But their message is crafted from more than gin expertise alone.

We meet in the bar itself, The London Gin Club. With its Jazz Age enamel advertisement-laden walls and its red-brick floor, the bar creates an atmosphere with a markedly retro feel. A place left somehow untouched by the forces of change radically altering the rest of London’s Soho.

The London Gin Club is the first London bar to devote itself entirely to gin. But there is not one thing to boil the bar down to as its defining strength. It’s not just that its 300+ gins continue to intrigue, its tasting menus continue to inform, nor its comprehensive and inventive cocktail list continues to inspire (– nor simply a combination of these facts).

It might come as a surprise to learn that the creative duo who run the bar are artists.

From the paintings of the human anatomy to recreating drawings of 17th century panoramic drawings of London, Julia has a meticulous hand and a sharp eye for detail when it comes to drawing and painting. She also collects and curates old oddities, from 300-year-old gin decanters to Tudor pipes.

Victoria’s artistic sensibility encompasses the more illustration-based and photographic spheres. Her abstract photography engages with minimalism and symmetry, while her illustration work is scrupulously attentive to the science of shape, colour and composition that makes images engaging.

The two met in the very building they now run together. In 2002 Julia had opened The Star at Night on the premises, a mixed gay cocktail bar and nocturnal double of The Star Café.

To add to their plethora of artistic skills, both Julia and Victoria were also budding historians, fascinated with London’s past.

With any extensive investigation into the history of London from the late-17th century to the present day, you are bound to encounter gin a number of times along the way. From the days of the 18th-century Gin Craze, when gin consumption was so out of hand it took five separate parliamentary acts to control it, to the development of the London Dry Gin that saw a spate of new gins produced in the early 19th century, London history and gin history are intimately connected.

Julia and Victoria always had their own love for and interest in gin. But in 2009, following Sipsmiths’s protracted struggle with HMRC to overturn the 1751 Gin Act, micro-distilleries began popping up all over the capital and more and more new gins started hitting the shelves of local spirit shops.

The artists found themselves at the mercy of the temptation to make their mark on the emerging market, which was made ever more irresistible by the fact that, with Hogarth’s Gin Lane just around the corner, The Star at Night was nestled in the very historic gin region of London that had excited their historical imaginations since their first forays into gin history.

When the two creatives put their heads together to see what they could create out of their shared passion, the result was a total rethinking of the gin experience for the 21st century. With the rebranding of The Star at Night to The London Gin Club, the pair dedicated their expertise (knowledge of London and gin history + well-trained palettes) to the task of facilitating the enjoyment of gin for others.

Creative Londoners: What was the decisive moment that made you both say: “right, let’s do gin”?

Julia Forte & Victoria Griffiths-Fisher: The light-bulb moment was having our first copa serve gin and tonic in 2012. It’s hard to describe just how much it transforms a humble G&T. It elevates it to another plane of enjoyment and, in our opinion places gin in the same category of drinks such as fine wine or whiskey that deserve to be savoured, enjoyed and shared. We wanted to bring that experience and enjoyment to our customers. Coupled with the fact that we both love gin! 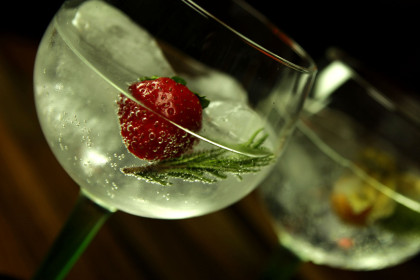 Much of the curiosity that drove them to delve into the history of London, they found they could explore artistically.

Gin money (with so much attention to detail as to include a wax seal): 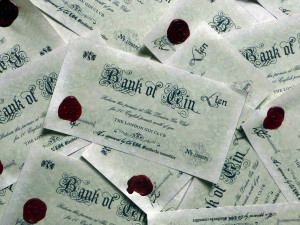 A periodic table of gin, and, the one we like most of all, an underground map of gin: 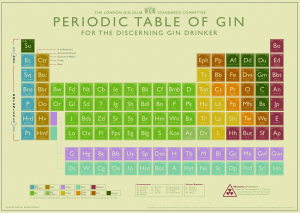 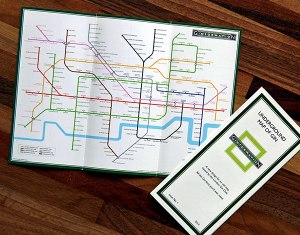 Creative Londoners: What inspires you to create an illustration?

Julia Forte & Victoria Griffiths-Fisher: Gin provides so many hooks into other areas and disciplines you can’t help but have ideas… London history, social history, the science and history of distilling, culinary arts, hedonism, advertising… Researching these generates huge amounts of interesting information which then leads to questions about information visualisation and graphic design.

If The London Gin Club is infused with each of Julia Forte and Victoria Griffiths-Fisher’s creative backgrounds as artists, then the bar itself is a living museum of their work.

Creative Londoners: What is the most interesting fact in gin history you’ve each encountered?

Victoria Griffiths-Fisher: It is hard to pick one!

The fact that, despite publishing his infamous ‘Gin Lane’ engraving in 1751 (probably spurred on by his anti-gin campaigning buddy Henry Fielding), William Hogarth was a gin drinker and was partial to a bowl of gin punch.

And that the term ‘Gintellectual’ was coined during the Prohbition to describe the gin drinking, speakeasy frequenting set.

Julia Forte: Just how intertwined gin is with the history of London – early medicine, social change, the development of consumerism, the emancipation of women, you name it. In the 18th century gin was in the press, in satirical engravings, in broadside ballads, discussed in parliament, it had a huge social and economic impact.

You can find out more about The London Gin Club by visiting their website thelondonginclub.com.

An online journal telling the stories of London's creatives.