Chirolles Khalil is a director with a fascination for stripping character down to its integral components.

Our interview is set in one of London’s many bustling creative regions: Camden Town. Usually, Chirolles spends his time maintaining an incredibly busy schedule at Drama Centre London, UAL, just down the road, where he is in his final year studying for a hands-on degree in directing. Today, Chirolles has managed to make himself free for an hour — so, making the most of it, we sit, chat and soak in the area’s vibrancy.

Born in Italy to Egyptian parents, Chirolles went to an English-speaking school in Milan. He also speaks French.

“Languages is my back up plan”, Chirolles jokes.

Partially as a consequence of Chirolles love of languages, he found himself an avid consumer of all types of stories. At home, he discovered his attachment to Egyptian cinema, back to the old melodramatic classics of the black and white era. In school, he read Shakespeare and developed his active interest in theatre by acting.

“Art in Egypt hasn’t really flourished that much. It’s rare to find an Egyptian artist who has lived abroad and has decided to actively pursue a career in the arts.“

Growing up in Italy with an Egyptian background created its own unique set of circumstances. Chirolles struggled, at first, to convince his parents, who had wanted him to pursue a more science- or business-oriented route, that a career in the creative industry would be a fruitful path.

But Chirolles’s passion was untempered. At the age of seventeen, he wrote an adaptation of Oliver Twist for a youth theatre in his hometown. It attracted a lot of attention due to its being a play in English staged in Italy. 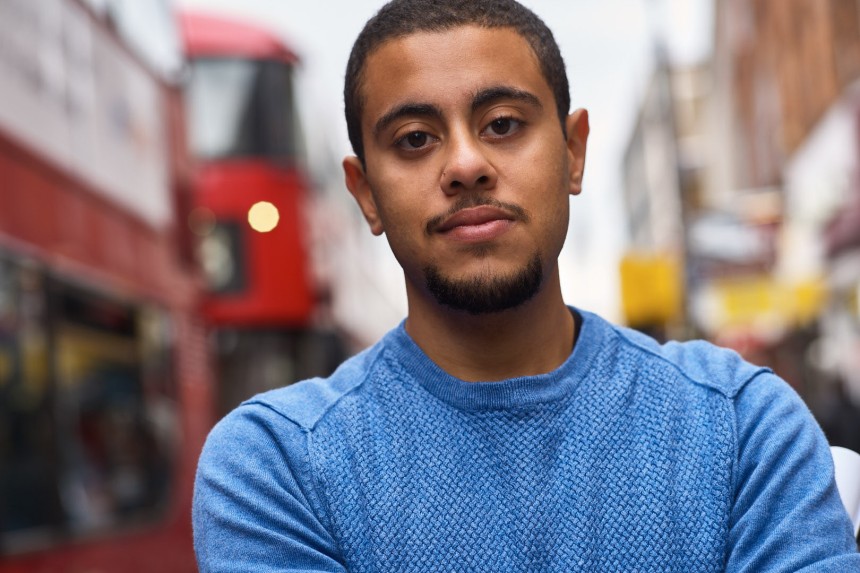 “As an actor, you’re required to make the audience believe the world; as a director, you get to create it.”

Suddenly, Chirolles was exposed to the whole process of stage production. The experience taught Chirolles not only to make use of what he had learned as an actor, but to apply the principles of the director, the producer, and the writer, to his creative output, too.

Chirolles learned about the process of filmmaking from scratch to add to his plethora of skills as a director.

Creative Londoners: What does the role of “director” mean to you?

Chirolles Khalil: You create everything – the details and the nuances. That’s where I derive most of my satisfaction from: making the world for the audience to believe everything they see. And it usually goes beyond the characters, too. I like decomposing a text and trying to understand what it actually means – creating a world for the character, an inner-life, that is not necessarily projected immediately, but vibrant and fiery in the actor who’s playing the role and creating the world.

There are three stages to filmmaking:

Essentially, there are three different films. Once you receive the script, that’s the writer’s vision. If you’re lucky and the writer is there with you, he might influence you in what he/she sought the film to be. I’m always open to that because ultimately you are writing someone else’s story. Some directors might take it and try to make it their story and try to put themselves in it. But I think the more you can combine the writer and you as the director with it, the more accurate to the script you can be.

As a director I feel like I am the one in charge to take the words and translate it to visual imagery. That’s my job: storyboarding. And working with actors who help the audience understand the world being represented. It could, for example, be set in 2017 London, but then what does that mean? That’s too vague; you have to narrow it down. Where are these characters in each of their own lives?

You have to tackle the specific details, the characters’ individual stories that fit in the narrative of the whole script. That’s my work as a director to translate the written text into visual images and to make sure that the acting is compatible with the visual images that I’ve translated from the text.

Creative Londoners: What has inspired you in the filmmaking world?

Chirolles Khalil: I love every kind of film, especially a well-structured narrative. My favourite films are character driven, where you observe a character in his world and follow a simple narrative. I’m not really into action movies; when I make films or watch them, I like something that’s more poignant to the spectator, connecting them to what the character is going through — reaching a deeper level — rather than just be swept away by grandeur. Though Baz Luhrmann’s films have grandeur, they still focus on the character rather than events. That’s how I see it.

In 2017, Chirolles made his short film debut. Lie with me tells the story of a character, Calum, who is not able to accept that he is adequate enough to be with his own partner. Calum’s anxious condition and inner-torment blind him from the happiness that awaits him. Chirolles expertly crafts a story in which we experience the events that take place as subordinate to the emotional world Calum inhabits.

Creative Londoners: What have you found that you like about working with film?

Chirolles Khalil: What I love about film is that it is actually easier to make the audience believe the world that you are creating than theatre. It is just one screen you have to fill and make as accurate as possible. Theatre is left more to the imagination and requires a bit more work. Most directors are control freaks, like myself. You hope each work will generate different interpretations. But you also hope that the key message will get through, too. I find that easier through film.

Also the finished outcome you can achieve with film on no budget goes much higher than what you can do with the same budget for theatre. That’s a sweeping statement, but for me at least I’ve found that to be true. The amazing thing about theatre is that you have that live audience that you’ll never replicate in film. Unless you do a Woody Harelson and do a one shot film that’s screened live in the theatre.

Creative Londoners: Where did the story for Lie with me come from?

Chirolles Khalil: I had been been fascinated with Callum’s character for a long time. He’s a guy who seems to have everything sorted, but there’s just something in him – some inner obstacle – that is not letting him be happy. Happiness is there standing in front of him, but he doesn’t want to rush. He’s not at that stage in life. The emotion is nonsensical and might strive from weakness. I think his character is a complement to the ability people have to take their time to understand the things they’re going through in order to enjoy them. The concept of his character is shown as a weakness, but it is itself logical: don’t rush, think about things.

I came up with the story by starting with the idea of the character. I then went to my good friend Aria Emory who has written a feature film before. He wrote it for me. The initial script and the final product were completely different.

Creative Londoners: What was the process behind Lie with me?

Chirolles Khalil: I worked closely with the writer. When I received the text I was very satisfied with it. I went out and shot it as it was written in the script. But when I went to the editing room and tried to edit it as the script was written, I found myself lost. It wasn’t the film I had prepared with the actors. I was still satisfied with the end product, though I see faults and everything in it.

It took seven months to edit what is now a nine minute film. But for most of those nine months it was a twenty-minute film with not much story coming through. I found that it was because of the way it was edited. As soon as I got someone else to look at it with fresh eyes, it became a closer film to what I wanted to make. My greatest mistake was in trying to recreate the script. I think it’s about translating the script’s meaning to a more relatable world.

In May 2017, Lie with me got screened at Cannes Film Festival — a remarkable achievement for a first attempt.

Creative Londoners: What was it like to go to Cannes?

Chirolles Khalil: My mistake was, as I found out, to go on the second week of the festival. I should have attended the first week when most of the producers go. But I wouldn’t change my experience at all: I went out to experience Cannes for what it was – I didn’t go out there with a game of wanting to sell my short film or change it into a feature. Most filmmakers go out there to seize that opportunity, but I wasn’t ready.

So I got a chance to experience Cannes as a partaker. There was no pressure on me to find a producer and make the next step. Sometimes it’s good to see the perks of the industry; to see how beautiful it actually is; to take your time and build your way up to it. The more you rush, the more you’ll have to compromise along your way. I still have a lot to learn about who I am and what sort of work I want to create.

Creative Londoners: What is the most interesting thing for you about directing?

Chirolles Khalil: I’m interested in the simplicity of human emotions. I think this has something to do with the fact that I have Egyptian origins, have been brought up Italian and have lived in London for the last two years. Regardless of whoever you’re talking to, and in whatever language, the thing that connects and means the most is simple human emotions.

I find it fascinating to just stare at a person and try and create a story about why they might be looking sad or why they might be looking happy. I like to translate that human emotion without necessarily having to put text to it – you can do it through images. If I one day manage to translate a full story without dialogue – making a spectator understand and empathise with a character experiencing emotions – that would bring me great satisfaction.

I think because I’ve grown up with very melodramatic films, in this stage of my work I just like to strip it down to the very core and ask “Why?”.

Take a subject like love, for example. It’s so deep and specific. But often it’s only touched on. I like to go to the very beginnings; I like to find the key components. I like to address the basic human emotions that everyone around the world has experienced or will experience.

You can follow Chirolles Khalil’s work as a filmmaker via Vimeo: vimeo.com/chirolleskhalil.

An online journal telling the stories of London's creatives.